McDonald's restaurant in Sandiacre turned down 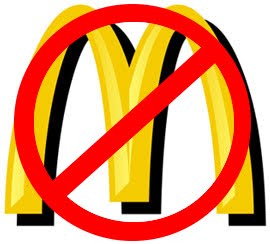 VILLAGERS have headed off moves to open a 24-hour McDonald’s – saying it could become as busy as a motorway service station.

The project, which would have created 65 jobs, was planned near where the M1 and A52 meet in Sandiacre – with advertising to be seen by motorway traffic.

Erewash councillors were advised by planning officers to approve the £2.5 million scheme on the land.

But neighbours said McDonald’s should not be allowed to operate around the clock – and claimed it would cause traffic problems around Bostocks Lane.

Local resident Maxine Jones said 93 protest letters had been sent in and claimed the new destination would appear on driver’s sat navs as a place to stop to eat.

“It will bring excess people to the area – we will be getting another motorway service station,” she told the council’s planning committee.

And the headteacher of nearby Friesland School, Peter Monk, said pupils would be tempted to call at McDonald’s for lunch rather than have healthy meals in the cafeteria.

“We have not served chips for many years,” he added.

East Midlands McDonald’s director Gareth Pearson argued it would be an asset to the area and would not increase noise. Permission already exists to build an office block at the site, although there are no current plans for development.

“Because we are long term, we will contribute to the local economy and we will work hard to address issues,” he said.

McDonald’s jobs could lead to good careers and the firm would provide backing for a local football club, added Mr Pearson.

But ten councillors voted to reject the scheme – with only two voting in favour.

One of the supporters was Cllr Howard Griffiths who said: “It seems to me we have brand snobbery. Whether you like it or not, jobs are important.”

But Cllr Frank Phillips told the meeting it would be a “charmless, characterless building at a gateway to Erewash”.

He said an approach to Ilkeston already had a KFC and was about to get a McDonald’s. Cllr Phillips added: “That is the only thing people will remember about this borough.”

Highways chiefs raised no objections to the project which would have 40 parking spaces. A total of 271 people signed a protest petition. Risley and Sandiacre parish councils were also against the scheme.

After the meeting, a McDonald’s spokesman said they would study the council’s reasons for the decision before deciding whether to lodge an appeal.

No McDonald’s In Sandiacre