It has been national “Small Business Saturday” so I have been out and about supporting our great local shops and traders. Yesterday’s “Welcome Home Parade” in Beeston was a great success; please scroll on for more news of my work this week. 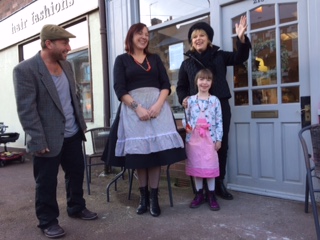 Shabbylicious on Derby Road in Stapleford is the latest independent shop to open in Stapleford. It was a real treat to open this lovely cafe featuring ‘shabby chic’ furniture which is also for sale along with the coffee, tea, cakes and buns. Stapleford is attracting small and bigger businesses, it now needs good strong leadership from the business community to become an even better place to live, shop and work! 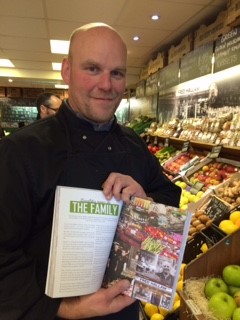 My support for small local businesses took me to Beeston after enjoying some great Stapleford shops. Fred Hallam’s is a Beeston institution and along with the fruit and vegetables, one of the few places left to sell fresh fish and shell fish. Founded in 1908, Hallam’s is now being run by fourth generation brothers Miles and Andy.

Not surprisingly they star in a new Nottingham Cook Book which they are selling and signing! 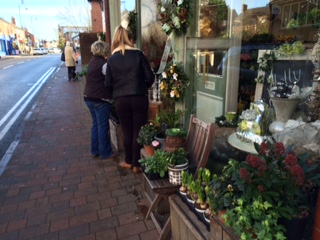 Kimberley has a good number of small traders offering a fine variety of goods. After a coffee at Madhatters I enjoyed buying some beautiful Christmas flowers at Bees Flowers which is a lovely shop on Main Street.

I believe all our towns don’t just need more support from the various Councils but more specialised advice to help them survive and thrive. I am far from convinced that Kimberley and Stapleford Town Councils or Broxtowe Borough, have the expertise we need; I also take the view that unless they have a sound background in business, politicians of whatever hue should be there to support not rule our shops and traders! 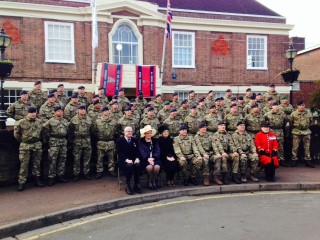 Congratulations to the Royal Engineers based at Chilwell and Broxtowe Borough Council for staging a wonderful “Welcome Home” parade for men and women ‘sappers’ who have completed their last tour of Afghanistan.

Our local Royal Engineers not only helped build camp Bastion and other installations in the most testing of conditions in Afghanistan, they then dismantled the entire operation as part of our withdrawal.

There was a huge turnout in Beeston with people coming to say thank you and pay their respects from all over Broxtowe. It was a great occassion.

Following my last email newsletter about ToysRus, I’m grateful to constituent Sarah Reeder who tells me that they opened their shops for two hours specially for families coping with autism, last Sunday. It’s always good to hear when the big stores do the right thing and I hope similar shops follow suit.

The Beeston dig up continues

You couldn’t make it up – as the tram works come to an end in Beeston (though walking down Middle Street today it was difficult to believe they will ever end) National Grid announced they are set to dig up part of the town. They are due to meet Notts County Council on Tuesday to work out when; in the meantime I have written to the local Government Minister – it is ludicrous that utility companies make long term plans without consulting local authorities. I will post my letter and any response on my web site. 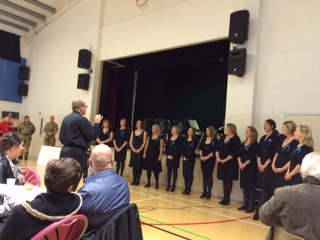 Friday’s Welcome Home parade included a bit of a party in the Pearson Centre where families joined the soldiers who had marched through Beeston. We were highly entertained by the Chilwell Military Wives Choir who sang beautifully.

They are one of the groups I am taking to Parliament next Monday (December 15). I have also invited residents and businesses who have endured the tram works and a number of community leaders.

Mia Kee – lives in Toton and has been campaigning to defend the Green Belt from development long before Thursday’s election!

I very much hope voters will elect Toton’s Mia Kee this Thursday. I first met Mia when she came along to a public meeting in Toton which I had called, to defend the Green belt from development. Mia has been campaigning ever since for her community – long before the election was called following the very sad death of Councillor Marilyn Hegyi. Mia is a governor of Banks Road School where her daughter goes to school, full of enthusiasm for her community, great fun and in the nicest possible sense – a normal,moderate, sensible person! Polls open at 7am and close at 10pm.

Let me know if you would like to help elect Mia or want to contact her before polling day.