Hello again,
If you live in Toton or Chilwell Meadows, I very much hope you will vote in tomorrow’s by-election for a new Borough Councillor.

If you do (polls open at 7am and close at 10pm) I would ask you to vote for the only local candidate, Mia Kee. Mia has been campaigning to defend our Green Belt long before the election was called,  is a governor of her daughter’s school on Banks Road, is full of enthusiasm and dedicated to her community. In short she will make a great Borough Councillor, which is why so many people of all and no political persuasions have pledged to support Mia Kee.

I have a few other short pieces of news so please scroll on.

National Grid works, Toton dangers and plans to extend the tram to Kimberley

National Grid called me this morning with an update about the planned gas mains repairs in Beeston Town Centre which sparked uproar last week. Yesterday, they met officials from Notts County and Broxtowe Borough Councils along with representatives from NET and the tram constructors TWA.

In short they have all agreed to work together and see if the very important work to the gas mains in part of Beeston can be carried out before the tram works finish and the works to Beeston Square are completed. It is to be hoped National Grid can be accommodated. 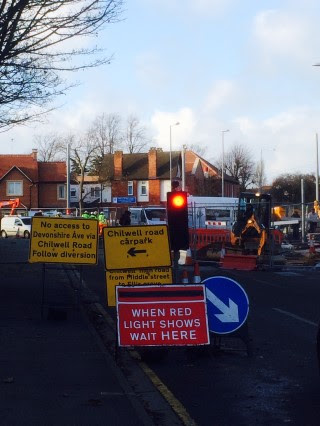 It is almost impossible for pedestrians to navigate the maze around Middle Street, Chilwell Road and Devonshire Avenue.  I have complained before (with success) to NET/TWA about the lack of proper signage for pedestrians and motorists at this junction but the situation is now worse. Part of the problem is that the route through to the centre of Beeston is always changing, creating a maze through the tram works. Signs are blocked by tram workers’ vehicles. I’ve contacted NET to ask that workers use a common sense approach to where they park and to ask that they review signs and routes urgently.

There have also been reports of more gridlock along Station Road and Wollaton Road; again I have contacted NET and also asked them to fix the lighting on parts of University Boulevard.

From Monday 15 to Friday 19 December, Toton Lane will be fully closed from Cleve Avenue to Bardill’s Island between 8pm to 6am every night. This is for resurfacing and signal installation. There will be diversions to the A52 through Long Eaton via Bostock’s Lane. I have contacted NET to ask why local residents living off Toton/Stapleford Lane were not fully informed of the closures and I was told information leaflets would be delivered by the end of the week.  They also assured me that the contractors will be keeping the emergency services fully informed. My thanks to a Stapleford Lane resident who has contacted me about dangerous driving in the slip road as some motorists seek to queue jump. I have contacted the police and asked them to assist. I have witnessed this and it is very concerning.

You couldn’t make it up!

Broxtowe Borough Council will vote next week on whether to spend £20,000 of your money on a feasibility study into a new tram line to Kimberley. Conservative Councillors opposed this a few months ago and plan to do the same again. It is the stuff of madness to use tax payers’ money in this way before we have learnt the lesson of the tram works in Beeston, Chilwell and Toton and before we see whether the promised economic benefits actually materialise.

I fear this proposal is further evidence of the complete failure by Labour Councillors to understand and empathise with the appalling affects of the tram works notably on Beeston residents and traders. I very much hope that Lib Dem Councillors will do the right thing and join with Conservative Councillors and vote against the proposal.

I like trams – but they have to be constructed on the right route, with minimal disruption and with realistic contracts, proper planning and guarantees of proper communication and compensation for businesses and residents. I am also increasingly concerned that we make sure the huge amount of money needed to build a new tram line is worth it to the local community and not just the City.

As you may have seen in the Nottingham Post a kindhearted Beeston resident, Peter Bone, played Santa on Saturday at Christ Church in Chilwell and ended up getting a parking ticket. The Pre-School Panto and party was somewhat spoilt by over zealous parking wardens. I have already written to Notts. County Council and asked them to waive the fine. If they fail to enter into the spirit of Christmas I will happily donate the £35 to the Pre School fund as the volunteers have offered to pay the fine.

I hope common sense will prevail.

Despite the invitation from the BBC, I am not taking part in tomorrow evening’s Question Time as I am having dinner with Boris Johnson to raise funds for my election campaign. The joint event with my friend and Sherwood MP, Mark Spencer, has attracted almost 500 people from both our constituencies. It should be a great evening.

What’s on in Broxtowe

​What’s on:  Christmas meeting where I will give a talk on ‘Commemorating war – striking the right balance’

What’s on:  Christmas coffee morning in aid of the Mayors charities.

Pearson Centre, Beeston from 10am til 12.

​What’s on:  Come and celebrate Christmas on Chilwell Road, there will be a giant snow globe with free photographs, Christmas crafts tent plus musica; performances.  Along with all the entertainment there is free parking and great Christmas offers from local businesses.

Also playing on the 14th and the 20th. For full details please click here.