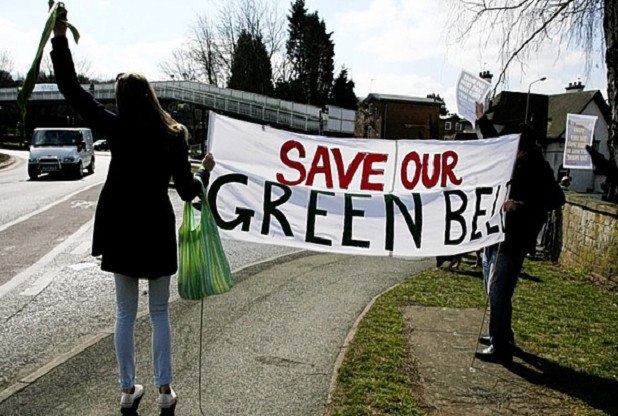 Protesters fighting against the plans for Field Farm.
A housing development plan thrown out by a local council could be back on the agenda as the company behind it has appealed the decision.

Westermans Ltd submitted plans for 450 houses on Field Farm in Ilkeston Road, Stapleford, back in 2011, with phase one of the project involving 118 houses.

But Broxtowe Borough Council refused the planning application in April, saying “significant and demonstrable harm” would be done to the site because of poor design.

Read more: Key dates in the history of Field Farm

Now, the developers have written to the Secretary of State for Communities and Local Government, Sajid Javid, calling on the decision to be reversed.

A statement published by the council after they turned down the application said: “Significant and demonstrable harm would be caused by the poor overall design quality of the development by reason of the appearance of the proposed buildings and the failure to create a distinctive place that responds to its context and maximises opportunities to improve the appearance of the immediate surroundings.

“The proposed development fails to achieve the aspirations of the council for a development of exemplar design on this site, as identified in the Broxtowe Aligned Core Strategy. There are no material considerations of sufficiently compelling weight that outweigh the clear conflict with these established planning policies.”

But Westermans believes its appeal is valid.

A spokeswoman from the firm told the Post: “An appeal was submitted to the Secretary of State as we disagreed with the decision made by the council. The application is now being processed by the Planning Inspectorate and as such, we would not wish to comment further at this time.

“Irrespective of the outcome of the Planning Inspector’s decision, we would wish to continue working with the council to deliver the much needed housing for existing and future residents of Broxtowe.”

Residents are fuming about the appeal after campaigning against the development for several years.

Councillor Richard MacRae, who represents the area on Broxtowe Borough Council and lives in the town, said: “This is about the people round here. They are going to take a really vital green space which we use for dog walking and what do we get in return?

“There has not been enough public consultation. If you look at the homes they are building at Toton, they have held public meetings, listened to the residents and worked together. Westermans hasn’t and we are getting nothing back.”

It will now be down to the Department for Communities and Local Government (DCLG) who will look at written statements from all parties and carry out a site inspection before coming to its final decision.

A spokesman from the Planning Inspectorate said: “We can confirm an appeal has been made but it is in the very early stages and still going through processing.

“It seems to be quite straight forward with only written submissions and no need for an inquiry or hearing, so so once an inspector is appointed, it could be concluded as soon as November if it stays this way.”

Councillor MacRae added: “I hope the Secretary of State stands by the decision made locally. He doesn’t live around here. It would be so unfair if he said they just had to get on with it.”